Maraya Wiltrout opens up about diabetes 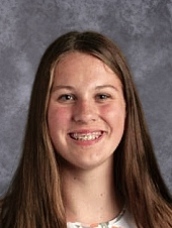 On October 15, 2015 I was diagnosed with Type One Diabetes (T1D). I had no idea what this meant. Was it a mental disease? Something life-threatening? Was it because I ate too much sugar? I soon learned the answers to the questions that swirled through my mind.
The doctors at Cambridge Medical Center sent my family and I to Children’s Hospital in St. Paul. There my family learned the ins and outs of managing this life-threatening disease. We learned that I didn’t do anything to cause my disease. It wasn’t because I had too much sugar or didn’t exercise enough. It was just because of a mutation in my genes.
I learned that Type One Diabetes is the immune system attacking the beta cells that are located in the pancreas. The beta cells produce insulin which is responsible for helping the cells of the body use glucose (sugar) for energy. When the immune system attacks the beta cells, there is no longer any insulin helping the glucose get into the cells, so the glucose builds up in the blood. This is how people get “high blood sugar.” When the blood gets too much insulin, it takes too much glucose out and blood sugar can go low. This is referred to as “low blood sugar.” For a non-diabetic a normal range for blood sugar is 80-120. When I was diagnosed my blood sugar was 814. High blood sugar over an extended amount of time can be very serious. This causes Diabetic Ketoacidosis (DKA). DKA can lead to coma, organ failure, and eventually death. Low blood sugar is more immediately serious, causing people to pass out, have seizures and die much quicker. 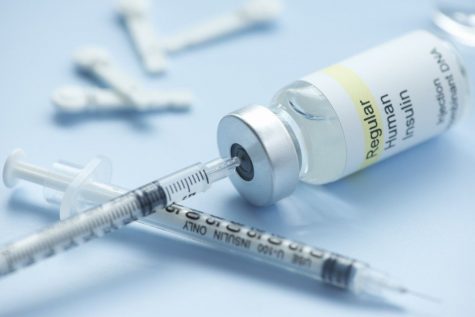 Diabetics also experience physical pain. Many have to give themselves multiple shots a day. Others choose to wear an insulin pump that’s site only needs to be changed every 2-3 days. Managing this disease also requires daily finger pokes to test the blood. Some diabetics however wear a Continuous Glucose Monitor (CGM). The CGM reads the blood sugar constantly and can even send alerts to your phone. Recent technology has made managing T1D much easier.
T1D is shockingly common in our community. In our highschool alone we have 15 type ones. This works out to be about 1% of the student body. This is much higher than the prevelance in the United States of 1/300 children 18 and under (ncbi.nlm.ih.gov/pmc/articles/PMC2925303/).
I know that there is a negative connotation to diabetes. Some people believe that it’s somehow related to being overweight and unhealthy. I don’t like that people may think I got diabetes because I was unhealthy. People frequently tell jokes where diabetes is the punchline. I personally do not get offended by most of these jokes, and I actually even most of them are pretty funny. The only ones that trigger me are the ones that are like “Oh I’ll get diabetes if I eat too much sugar!” because that is so far from the truth! I also tend to be pretty open about my diabetes, so most times I’ll just correct people when they are wrong. I even joke around a lot, especially when my blood sugar is high. It’s fun to see the looks on strangers faces when I say things like “Oh I’m so high right now!” Finding the humor in the day-to-day management of diabetes helps me not feel so exhausted from managing it.
Exhaustion does happen however, and I have definitely experienced burnout from managing diabetes. I just get so frustrated because sometimes it feels like I can’t do other things I want without it getting in the way. When I feel that overwhelmed by diabetes, I just hand the reins over to my parents for a while and try to do as little as possible.
One area of my life that diabetes tends to interfere the most is in sports. I play basketball and softball, and one of my biggest fears when I was originally diagnosed was how it would affect the way I played sports. Every practice I have to bring a full case of juices boxes because I never know what could happen. I hate that I sometimes have to sit out when I could be working on some drill to improve my game, or helping my team to win a game. Recently I went to an hour session with my pitching coach. I had to sit out for about half of it, because my blood sugar kept going low. Moments like these make me hate diabetes the most.
Diabetes has also brought me many wonderful opportunities. When I was in 7th grade Senator Amy Klobuchar invited my mom, my twin sister (who was diagnosed as well about a year ago) and I to a health care debate in Washington D.C. The debate was televised live on CNN. She talked about us in her closing statements and to this day it was one of the coolest things I have ever experienced. My sister and I also got to speak on the steps of the Minnesota State Capital with State Senators and Representatives at a rally for insulin affordability. When I start to hate having T1D, I often remind myself of the things that it has brought me.
I’ve come to terms with the finger pokes, the insulin infusions, the juice boxes, the lows and the highs that are my life now. It’s either that or I die. Even with the hardships I encounter, diabetes is just one aspect of who I am, and I am grateful for my battles.