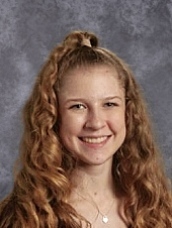 Kaci Kahler has been dancing since she was two years old. It all started when she was dancing around the living room and her mother decided to put her in a dance class. Who knew she would have come as far as she has! Since Kaci was little, she’s always hoped she would be dancing for the rest of her life, and even have it as a full career.
In the studio, the ninth grade Bluejacket learns basically every style. Her favorite type of dancing is “Contemporary”, or “Jazz”. The style of dance she doesn’t prefer is hip-hop. After many auditions she was invited to go to New York! When her and her family found out they were all so ecstatic and they ended up turning it into a big family trip.
“New York was amazing!” Kaci says. “A lot different than here, everything was a lot faster and more professional.” She was very surprised how friendly everyone was there. She said people just come out and just make conversation, and they were really open. Minnesota however, people seem to keep to themselves a whole lot more. The air was also really thick, and there wasn’t much greenery anywhere. Fortunately for Kaci, the weather was nice to her and her family for the time that they spent there.
She was there for a week and stayed at a hotel called “Yotel” that was right by the theatre. So thankfully, she didn’t have to go too far for practice. Kaci’s most memorable time there was when they got to perform on opening night. It was a musical called “Over the Rainbow”. The theatre was sold out for the whole entire weekend. The choreography had to be learned before New York, so she was taught the dance over facetime with her instructor. Once she got to New York she was able to do the choreography with everyone else for 5-6 hours everyday!
Kaci was really sad to have to leave New York and she plans on moving there one day to continue to dance. She met girls her age from around the world who have already made dance a career! She hopes to build her dance career in the next few years. Usually when you think about dance, you usually think it’s just girls or women, but 30% of the dancers there were boys.
Kaci’s advice for any readers that are interested in dance: “Audition and take as many classes as you can. The experience will be worth it.”