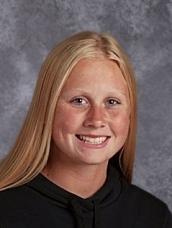 A few weeks ago, a Cambridge-Isanti High School girl’s soccer player scored a very impressive goal. Emily Nystrom was that soccer player who scored that spectacular goal. Is a goal worth a story? Well, this one was.
Emily’s fantastic goal included an out-of-bounds throw-in with a full-frontal flip, and while she threw the ball directly into the goal for a score. A throw-in is one of the few ways any player (other than the goalie) can touch the ball with her hands.
Emily was super excited because it was the first varsity goal. However, assistant Varsity Coach Mr. Hayft was pretty shocked because he had never seen anyone throw the ball for a score.
“I had no idea it was going to go in,” Emily said. However, she was able to channel her gymnastics skills to make the goal. She perfected the flip throw through lots of outside practice and repetition.